Black Women's Activism, Past and Present 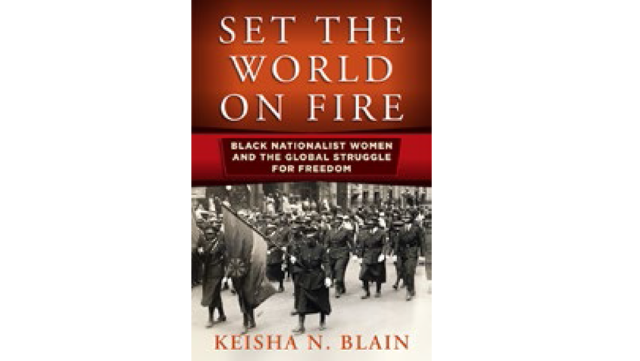 When Dr. Keisha Blain signed the contract to release her first book, Set the World on Fire: Black Nationalist Women and the Struggle for Freedom (2018), she had no idea of the world it'd be entering upon its release.

“[A]t the time that I selected the topic, I could not have foreseen some of the developments that have since taken place in the United States,” Blain admits as we chat shortly after the book's debut. Of course, she refers to the dominance and scope of women‐led movements like The Movement for Black Lives, #MeToo and the Women's March, each of which can trace elements of their roots to the methods and lessons of the women chronicled in Blain's book.

Blain traces her interest in the topic all the way back to a memorable undergraduate research experience on Global Black Social Movements, where her focus narrowed on the Universal Negro Improvement Association, or Garvey Movement, of the 1920s. “I wanted to know more about women's roles. I wanted to understand the kinds of work that they did, I wanted to understand why they joined the organization when they did,” she says. She credits her professor's encouragement of her curiosity with her deep dive into the topic, a dive that persisted through graduate school and all the way to the topic of her first book. “[H]e was very helpful—but I could tell oftentimes he didn't have all the answers, which was a great opportunity for me as a student because he encouraged me to do the research to ultimately find the answers to the questions I was asking,” she says.

These days, she's creating similar moments of revelation and curiosity for her own students at the University of Pittsburgh PA, where she teaches classes on the civil rights movement, black women's history and other topics of race and gender in history. Blain notes:

"If I'm teaching black women's history, I say, 'Give me a list of names, the key black women in US history who you are aware of.' As soon as I say, 'You can't say Rosa Parks,' students chuckle because that's exactly where they're about to go. Often it doesn't take long for there to be complete silence in the room. And an uncomfortable feeling where people realize, 'I don't really know that many black women in our history.'"

She cites a recent moment where many students in her class learned about Fannie Lou Hamer for the first time with her, sharing their bewilderment about how they hadn't previously learned of her. This adjustment of expectations bears out in the book, particularly regarding expectations around the book's subject matter. “Even as I articulate the term ‘black nationalist,’ I think immediately people will have all these thoughts about what that means,” Blain says. “What they'll find in the book is that it's often very different from what they imagined.”

Problems Beyond the Nation‐State
Set the World on Fire centers many women who were essential to black nationalist movements who had previously been given a similar “hidden figures” treatment up to this point. Figures like Ula Taylor and Josephine Moody (whose 1942 writings inspired the title of the book) come alive as Blain shares their triumphs and struggles; in fact, she believes it was they who told their story to her as she wrote:

"I wasn't always quite sure what I would find or even the path I would take. But in many ways, the sources guided me and once I found the key historical figures through the process of doing research, in a way the story sort of unfolded before me and thankfully I was able to flesh it out into this book."

The lessons the stories revealed, as you might expect, are ones Blain sees use for in this latest age of protest and demonstration. Perhaps the biggest, as the trajectory of the Garvey movement sought to prove? These problems are bigger than just America.

“It's important to understand that even as we express a call for #MeToo as a way to … no longer accept sexual harassment and sexual abuse wherever they unfold, we also have to say that this isn't just a concern for the United States,” she says. Citing Haitian author Edwidge Danticat's proclamation that the country's scandal with OXFAM is a #MeToo issue in the same way that many scandals in the hotel and migrant worker industries here in the United States are, Blain believes that “it's a global problem.” She continues, “If we see it as a global problem, we can think about global solutions and the ways in which we could form alliances across geographic borders to change and transform, really, systems of oppression.”

Expanding Knowledge
As we go forth to participate in these movements, and as we prepare our students—no matter their gender—to take part in this critical moment of change, I asked Blain how to expand the scope of our current movements in the way that the black women nationalists of her book's history did. What was her response? Expand knowledge and context, and then the scope will expand on its own.

“When I teach courses,” Blain says, “I find that it's already difficult to encounter students who have a full grasp of US history in and of itself.” Which means it can be even harder for students to grasp the global contexts too. But “with more exposure to these stories,” students can begin to comprehend “what they're experiencing is certainly not unique to the nation‐state.” Blain hopes the lessons students learn in her classes “will help them with their own political organizing” and encourage them “to reach out, reach beyond their communities or beyond the nation‐state.”