Fight Racism or Be Complicit 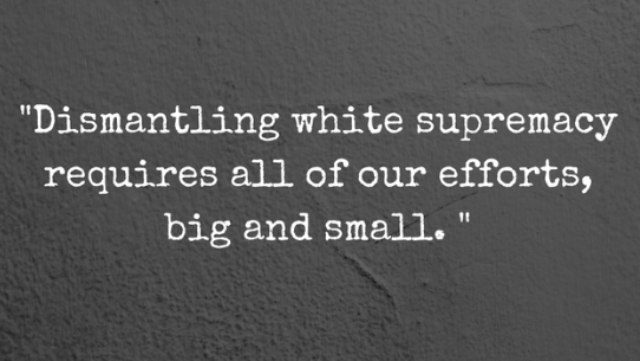 In early July, NPR reported that the Trump administration rescinded Obama administration guidance “that encouraged schools and colleges to promote diversity through their admissions process,” including advice on how schools could rely on race in college admissions. Education activists quickly noted that there would be consequences on diversity and inclusion in classrooms and on campus. I wasn't surprised by this decision; anyone who pays attention to the Trump administration's approach to higher ed knew this was coming.

This is one of the many attacks on Obama‐era reforms and guidance for higher ed. Keep in mind that the Department of Education already rescinded guidance on Title IX and campus sexual assault, and the Department of Justice (DOJ) joined in on a civil suit against Harvard University MA about the admissions; the suit claims the school discriminates against Asian American applicants. The DOJ is likely interested in this suit as a method to push an anti–affirmative action agenda.

Rescinding efforts that promote inclusion is yet another attack on people of color by the current administration. Think of the president's speeches that rely on racist stereotypes of people of color; demonization of immigrants and recent discussions of revoking naturalization of American citizens; the multiple attempts at a Muslim ban and the Supreme Court's decision to uphold his executive order; and the most recent horror, the separation of immigrant children—from babies to teenagers—from their parents at the border.

As I've watched the news recently, jaw agape and consumed by fury, I find myself thinking of the importance of Ijeoma Oluo's book, So You Want to Talk About Race (2018), for the current political moment. Talking about race and racism has always been important, but it feels even more pressing and crucial right now (when everything feels pressing and urgent).

Oluo is the editor‐at‐large at The Establishment and one of the smartest writers around on race and racism. I read her book because I wanted to think more about how I talk to other white people about racism and the importance of anti‐racism. My own work focuses on the Ku Klux Klan—one of the groups people understand to be synonymous with white supremacy. But white supremacy is not limited to avowed white supremacists. Her book explains why and offers a primer on structural racism and white supremacy for those new to these concepts and those already engaged in anti‐racist practices.

Oluo doesn't pull any punches. She shows how race defined her life as a “black woman in a white supremacist country.” America, she shows again and again, is not inherently a progressive, inclusive country (I mean, watch, read or listen to the news), but rather racism defines America and “exclude[s] people of color from opportunity and progress.”

So, what should we do? Her answer appears deceptively simple. The first step is that we have to talk about race and racism. All of us. Talking about race and racism is not a burden for only people of color but also for white people. These conversations will be hard and uncomfortable, she notes, because racism is hard and uncomfortable. But, we have to be able to talk about race, racism and white supremacy to be able to identify, discuss and dismantle systems of oppression.

We all live in a white supremacist culture, and racism is bigger than personal prejudices, bigoted words and actions, hoods, robes, swastikas and racist memes on social media. White supremacy shapes our world: politics, laws, policing and punishment, educational systems, reproductive rights, banking, home ownership, etc. White supremacy determines who is understood as human, granted dignity and rights, and who isn't. Oluo writes, “[I]f you live in this system of White Supremacy you are either fighting the system, or you are complicit.”

Oluo draws the reader into a conversation about race and racism that is engaging and uncompromising. She writes, “Because if you believe in justice and equality you believe in it all of the time, for all people.”

The reader's task, then, is not an easy one: to comprehend the systems of white supremacy, recognize their privilege, learn how to leverage it and then try to make a better world. Stand up and fight rather than remain complacent and comfortable with the racist status quo. For white readers, in particular, this book is essential, because Oluo documents how white people fear being called a racist more than they fear their “unexamined racism.” This is a significant problem: White people's feelings should never come before people of color's safety.

Talking about racism, however, is not all we should do. We have to act too. She needs the reader to understand racism and white supremacy, talk about them and avidly fight systems of oppression. And she asks a crucial question of readers: “[D]o you want to look like a better person, or do you want to be a better person?” She hopes the answer is the latter; I do, too. Being more concerned about how we appear is not the path to justice and equality. Dismantling white supremacy requires all of our efforts, big and small. Right now, we can combat racism in our political systems or remain complacent with the racist quo.

I know what I hope you'll do.